He Did It Anyway

The grace of God is greater than the universe.

Planet Earth is not just a tiny dot in the universe. Increasingly, astronomers are concluding that the entire universe appears “designed” for the sake of human life on Earth.

In short, 21st century scientists are discovering what the Bible told us more than three thousand years ago—God takes thought of us, He creates us a little lower than Himself and crowns us with glory and majesty to rule over the works of His hands (see Psalm 8). The whole universe cries out the obvious—that God has a special place for this tiny blue dot called “Planet Earth.” 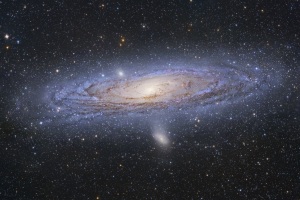 God did not do this because he felt “lonely”. Before He created the universe, He was doing just fine without us. He did it completely out of His unfathomable love.

How have we humans responded to this display of His love? At best, we have treated Him in the same way that red ants treat us. We note Him only when He seems to “invade our space,” and then we lash out at Him as if He were our worst enemy. Or we try to pacify Him with the bare minimum in religious rituals. Even most church people do not have a true day-by-day relationship with God.

Yet this continuing indifference and hostility to God, millennium after millennium, has not deterred God from loving us, lavishing abundance upon us of every kind. He has even seen fit to enter this loveless world and give His life for the sake of loveless people who slander, underestimate and degrade Him at every turn. He knew that we would treat Him like this, but He created us and entered into our humanity to save us just the same.

God was under no obligation to create the universe or human beings in His image. We have failed so miserably to represent His image, that He has every right to wipe us all out with no comment or explanation.

But the Bible tells us that God still loves us. He still plans to prepare us deluded beings for a New Creation beyond earthly description. That plan began even before Jesus Christ stepped into this world to rescue us from our indifference and sin to make us a new and chosen generation.

God didn’t have to do any of this, but He did it anyway. This is what the Bible calls “grace”—grace greater than our sin, grace greater than the universe. We should be thankful beyond words that He has given us this chance we never earned or deserved—thankful enough to tell others about it.

2 thoughts on “He Did It Anyway”